For Safety's Sake, how do you answer an electrical question?

TL;DR There's probably something better you could do for the next half hour then read this.

New user just asked a question for (a somewhat bad) example, and doesn't really sound like they should be poking around inside a breaker box. Where as, if someone spits out correct jargon I'd be inclined to just comment: Are you getting 220? (as I think they lost one of the incoming legs during a storm, but just blurting that out might not be the best idea to suggest as they might go sticking a VO meter into it, incorrectly)

(coherency from here on is suspect; it has become a dualistic question asking many ways to avoid giving poor advice and the diving-into of questions that for whatever reason, you shouldn't be. You have been warned)

I used to try to answer these questions but I couldn't deal with the fact of the possible ramifications of my answers. I know how to do... stuff. But most anything I know how to do was shown to me; not an online, bulleted blog: Ok, step one hold screwdriver in left hand... (erm, but I'm right handed)

Being given the steps to solve a problem is hardly the knowledge necessary to safely complete any electrical project.

Some questions sound like: Oh man, you really shouldn't be doing, what it is that you're doing.

It may be that I don't trust my self to answer them first, sometimes even when it's pretty obvious what what they need to hear. (but sometimes it isn't and then begins the epic comments session, see below) The meta behind this being, what's to tell the difference between a valid question that's deserving of an answer, and someone that you shouldn't give one to.

For this I have a good example: I was helping diagnose hooking up new thermostat wires inside a furnace, where I then asked if they put the cover back on when they tried testing it. Of course that's because the panel closes the safety switch or it won't work. They figured this out themselves eventually, but it was information I was unwilling to give; not to keep trade secrets, but because if you didn't know, or couldn't figure it out; should you know?

Maybe I'm just paranoid. Or maybe this is some real world shit that can get you killed.

Simply put, on trouble-shooting questions especially, I'd guess we'd have to first establish the OP's comfort level, and then provide each necessary step for them. (and then whatever future readers do with this information is up to those people?)

Perhaps I've digressed... (Ya think?) Having basically answered my own question with one of my own mottoes: If you don't know, don't answer. So, one last try if you're still looking for a question somewhere in all this to possibly answer:

If I've rambled on into drivel, I apologize. Please feel free to poke holes in any of my logic or simply answer with, Yea dude, just go on to the next one. Or any pro-tips on ... well, frankly, everybody waking up tomorrow after reading one of my answers?

I think, some of this may be a valid concern that may be pertinent to other SE sites. Replace the word 'electric' with whatever that may be, and post any part of it, altering it however, and wherever you want. Or please feel inclined to post similar topics on your other sites, For Safety's Sake.

Because, as I was once told here in my early days on DiY.se, Sometimes the best answer is no. 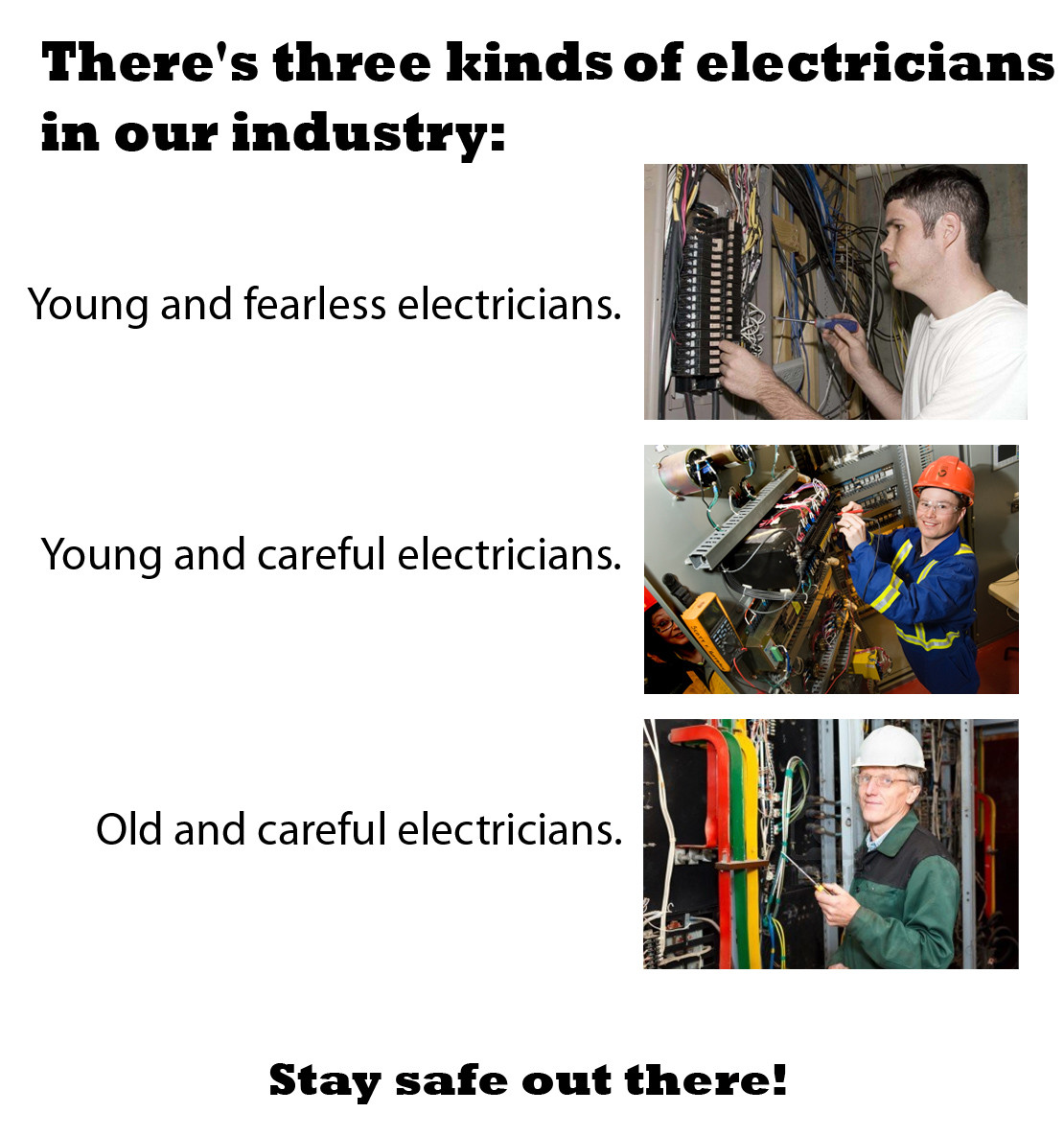 I can't answer for you, but I can tell you how I try to handle this. First, I try to answer questions at the same level of detail that they were asked. For example. If the OP asks a very general broad question, I provide a broad high level answer. I don't give enough detail for them to take action on it, so it's not likely they start poking around with a meter without seeking more advice.

Next I use technical jargon, to try and confuse out the folks that shouldn't be poking around. I've been criticized by folks for not using the "common" terms, but I do so for a reason. If you know enough to follow my answers, you're probably at the level where you're not going to kill yourself. If you don't, you'll likely follow up with additional questions or ask questions in the comments.

This is where another strategy comes in. If the OP reads my answer, and comes back with a comment that shows they're not qualified to be do the work. I'll tell them that they should contact a pro, or get some help.

You can also try to use the terms folks use to try and gauge their competency. For instance, if the OP refers to the grounded conductor as "commmon". I assume they may have a background in DC, or they've spent time on the wrong forums. Other terms can also give you some hints, "110", "220", "GFI". These terms tell me that either the OP is old school, or they've been poking around forums.

All in all, it's about trying to gauge the OPs level of knowledge, and provide information at their level. And NEVER be afraid to tell somebody to get professional help (from an Electrician, not a psychiatrist).

Again, as tester says - I can only tell you what I do.

I try to never write aggressively in answer to a question. People are here wanting to learn. I also will work very hard to understand what the person is asking, which does not always the words that went down on the paper.

I have worked in a number of countries where were people who were using english as a 2nd or 3rd language. If they are kind enough to speak english to me, when I am a guest in their country, and their native language is russian, I will work hard to figure out what is being said.

If someone is going off the deep end, I will try to divert. I have said things like 'what can I do to convince you not to try this'. I will try to push the safety issue instead of preaching that the CODE is an absolute, anyone with a few years in construction or maintenance has done things that were not to code.

Foolish is one thing, but I know that there are wire nuts out there that should have been red, and I used yellow. I still sleep at night

If the question asks for code quotes, then I will respond that way. If the question or comment spins on single word, used in a certain context, I will correct it if there is any way to do it.

I will try to answer comments with less hostility than the original. Maybe there is something hidden in rude words that will allow me to learn, or teach.

I worked as an electrician in the commercial / residential end of the world for a few years. I do not have a License for electrical work.

My vast experience is in the Entertainment Industry - an odd beast at best. Theater, Film, Television, Trade Shows, Cruise Ships all have quirks, some good, some bad. The number of things that someone will call a 'code violation' or as being 'against code' are just fine.

When something is only going to be in 1 city for 3 days, the word 'temporary' allows things that would make a building inspector faint. 20 cables 500' long of 4/0 loaded to 400 Amps with a connector every 100' that is big enough to insert a finger. Where the access to the general public is a piece of black cloth. Just not a big problem. In Times Square it would also require a 3' portable barrier.

So I try to be open to circumstances not being exactly as described.

If the most obvious answer to the question is found on the first page of a google search. I would rather give someone the information correctly here, and offer a few words to better explain. If one of the first 10 links in google will give the answer a person wants, something like 'Sure, no problem', and here the only answer given is 'call a professional - you could kill yourself.'

I will answer the question with, Yes, but here is why you really want to spend the money. There might be a chance the person understands why, rather than thinking one guy says call a pro, and the other yeah, go ahead and do it. I think it is better that I take the middle road.

I enjoy teaching, that is part of the idea behind stack exchange, take time to explain things to others. My degree in strong in physics. Science is so damn coo;, information is power and all that stuff. Someone taught me what I know, or gave me the chance to learn, I have this in mind in my answers.

The concept of using some jargon makes sense. My thought is that this is not the only place someone is looking for answers, how will the first page of links on google answer going to tell me about some technical term. I know a few cases where the same name is used for different things depending on if you learned the term on the East coast or the West coast.

I will openly debate or correct even those I think are wrong, no matter what their points score. Annoying to have your score voted down, because someone read what they wanted to read, and not the words you wrote, but if that is the worst that happens on any given day, life is good.

I also write too many words, so I try to give a short answer, and say I explain completely down below. :)

And then I explain below.

Oddest thing I have learned, an extension cord, with the female end cut off, is still and extension cord, and distinctly different from a male plug assembeled onto a pieece of the same type of cable. I am still working on figuring out the difference, if you know, please pass the information along.

Not the answer you're looking for? Browse other questions tagged discussion .

Welcome!
This site is for discussion about Home Improvement Stack Exchange. You must have an account there to participate.
Help
Visit chat

15
Dangerous answers
6
What should we do when we see something in the OP's situation that is dangerous, but not necessarily the subject of the question?
-10
Should "how do I DIY electrical work" questions be banned from this site?
4
Why is the use of relays in home wiring frowned upon?
5
Are commercial electrical questions on topic here?

3
Repeat question for each locality?
2
New product reviews and How To
4
What kinds of products would you like to try out and ask about on this site?
15
How do you feel about my site promotion ideas?
4
General electrical knowledge?
8
How to answer DIY question when OP wants the cheapest, not best option?
4
Should I upvote an answer that sounds good but which I haven't tried?
0
Is it possible for a non-OP to select an answer?
4
How to ask a question about reasons behind electrical code?
3
Do we need to require everyone to give a locale?