Where is the `Protect` option?

I've earned the Protect a question privilege, and it seems that this question would be a good candidate for it, with 14 answers already (and the opinion based nature of the question as shown by the responses we're getting). However, I don't see Protect as an option anywhere.

Has my coffee just not kicked in yet this morning?

You're right, it does show up below the question with the other links: 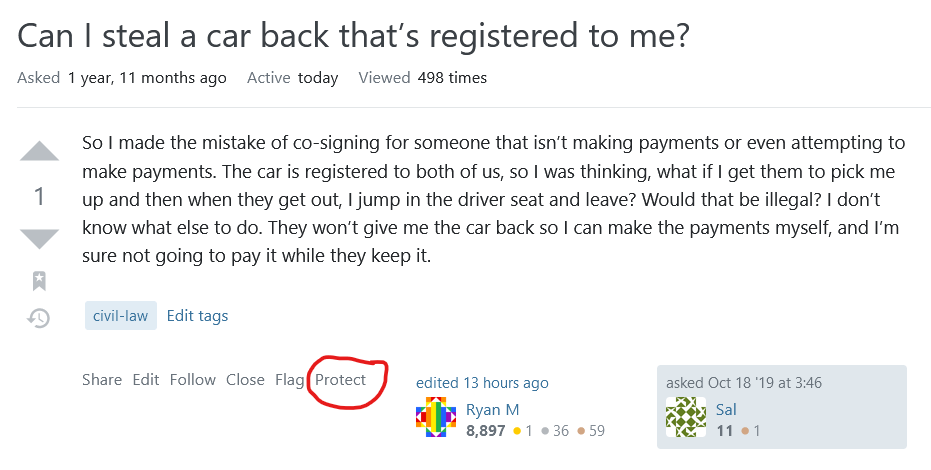 But it's not always available. As described by Taryn here:

the question must have at least one answer by a new user aka a user with < 10 rep on the site (which is the required rep limit to answer protected questions).

If the question does not have an answer meeting this requirement, then the protect option will not be available. This should minimize some of the protecting of questions that do not need it.

The theory is that questions should only be protected when there's evidence that they need it due to low-quality answers from users that would be stopped by the feature.

A quick scroll through the answers on that question confirms that none of them were posted by users who would currently be affected by that restriction. Of course, as a user who would be affected by that restriction, I don't have enough reputation to confirm that there aren't any deleted answers. But since you're not seeing the option, I assume there aren't.

Not the answer you're looking for? Browse other questions tagged support moderation .

Welcome!
This site is for discussion about Home Improvement Stack Exchange. You must have an account there to participate.
Help

2
What happened to the home-wiring tag?
4
Why are so few questions/answers appearing in the Review section?
3
Why are the numbers of an ordered list repeating?
1
Why is the "edit" link for a question not enabled?
0
What is the "profile URL" field asking for when deleting an account?
3
What happened to the "not about home improvement" close option?
2
Has there been a change to the Community bump rules?
0
Where does this "close question" message come from?